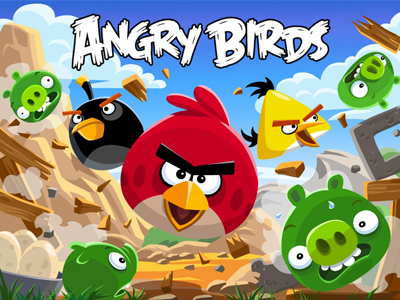 Can’t get enough of the classic arcade game that swept the entire world? Even if this excellent game is already more than 10 years old, people still go back to it. If you miss the high-flying birds and greedy pigs, you can always go back and enjoy the challenges. Get set for another round of defense-destroying, feathered adventures in Angry Birds Classic.

Join the multicolored birds as they set out to save their eggs from the green, greedy pigs. You’re in for a wild, bubble-bursting adventure in Angry Birds Classic.

Released in December 2009, Angry Birds Classic is one of the great runaway hits. Critics called it “one of the most mainstream games out right now” in 2010. And many people referred to it as the “largest mobile app success the world has seen so far.”

Due to its massive success, Rovio Entertainment released Angry Birds 2 in July 2015. There were several other spin-offs as well, including two movies, an animated TV series, and a ton of merchandise.

The game centers on a group of peace-loving birds. One day, a ragtag troop of green pigs stole the birds’ eggs, wanting to eat them. This event pushed the birds to fight back and retrieve what the pigs took from them. Using a giant slingshot, the birds take aim and shoot to destroy the pigs’ buildings.

Did you know Angry Birds Classic underwent several evolutions and additions to the series? During the initial release, the gameplay was only about shooting the pigs’ fortresses. By October 2010, the developer introduced themes around holidays like Halloween and Easter.

In a March 2012 release, there were new additions to its gameplay, featuring new birds and different gravity. Also that same year, in November, the Star Wars edition came out, having ties with the first trilogy. In September 2013, the game tied with the Star Wars prequel trilogy.

Star Wars was not the only film franchise that had ties with Angry Birds. In October 2014, people enjoyed the side-scrolling shooter gameplay in Angry Birds Transformers.

There were several more additions to the Angry Birds franchise. As of February 2019, it had a virtual reality version. This game had the art style and visuals of the Angry Birds movie.

Expect realistic physics gameplay and challenges that require skill and logic in Angry Birds Classic. In this timeless arcade game, you get 15 original episodes, covering over 680 levels. It also has a multiplayer feature that lets you play with other players in the Mighty League.

Are you ready to take on the challenge? Prepare to serve revenge on the greedy pigs. Join the birds as they aim, shoot, and destroy the pigs’ defenses in Angry Birds Classic.